What do you say to your children when they lose their first pet?

While lying in bed early Tuesday morning I awoke to the sound of my phone ringing. My first instinct was to cover my face with the blanket and ignore the phone call. Realizing that it was still dark outside I became alarmed and immediately knew that something was wrong. The gut feeling I had was unfortunately correct and the family pet, named Pickle, had passed away. Back tracking just a minute for you, I am divorced. The family dogs I have not been allowed to see in over two years. The past years finding solace in the fact that when my children visit the old family residence they would have their puppies. That didn’t stop myself from grieving for the puppies that I brought home from the breeder and cared for everyday. Losing Pickle now twice and the sadness I feel for losing this dog is tied directly to my late son.

Pickle was the pup who brought comfort after the loss of my son, Patryk Alexander. Actually the name Pickle was in honor of Patryk. His favorite little joke was to say “Break the Pickle (holding up his two fingers), Tickle, Tickle (tickling a friend). Some how I knew that this name would make him laugh and smile from up above. Then along came our second pup Olive. Having my hands full training two pups and after much needed healing, I decided that it was time to be a mom again (if possible).

After years of processing my grief and now having two adorable and well trained puppies, I was pregnant. Maxwell was born and from day one thought of himself as part of the pack. Yes, my little boy ran around with his dogs as if he were a puppy himself. He always gravitated towards Pickle and they became best friends. Even after my daughter Katia came along, Pickle and Max always had a special bond. It was a perfect pack with two puppies and two babies to hold, I felt blessed.

Which brings me to this gut wrenching day. Pickle was gone, and I found out later that day he had cancer. He had two tumors in the stomach and one on the liver. Over that night Pickle became septic and quickly passed that morning. My heart was breaking, I had no time to process since that morning I had an eight a.m. meeting at my sons school. This is the first ever school meeting I showed up unshowered. The rest of the day was spent crying in my car and panicking on how to tell my kids. Maxwell and Katia both loved their puppies. Although I some how knew that the news would hit Max a bit harder, being that Pickle was his best friend. 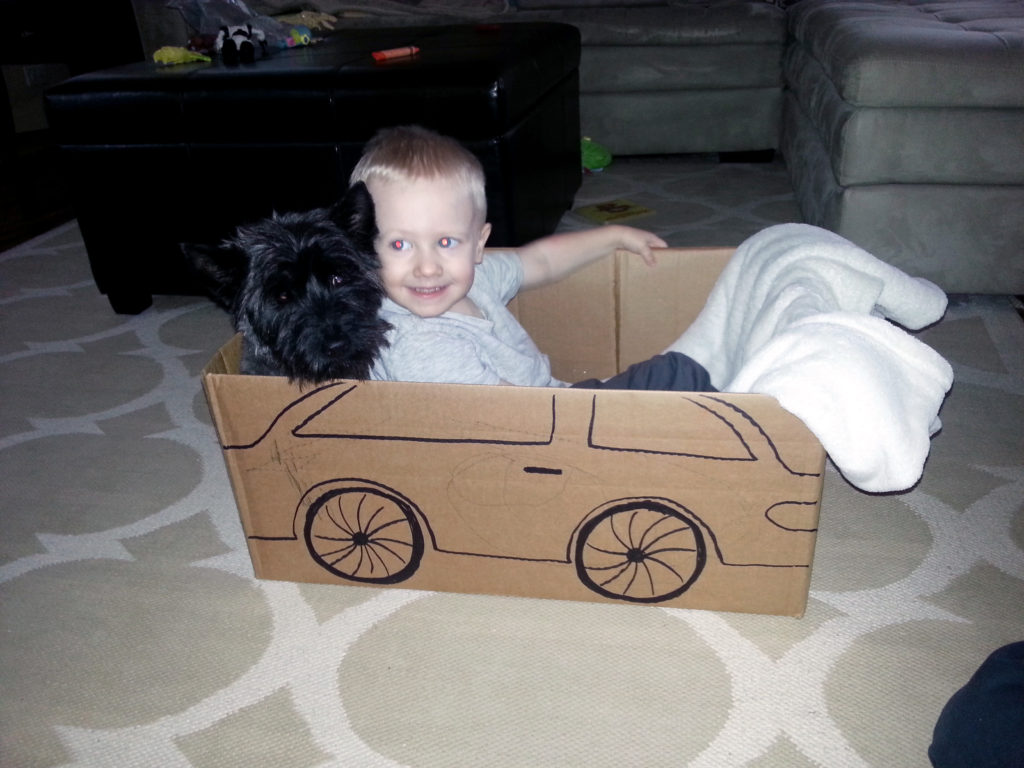 Back to that original question…

What do you say to your children when they lose their first pet?

My entire day was filled with randomly crying then trying to pull myself together. My heart was breaking at the thought of telling Max and Katia. The breeder helped to ease my heart telling me that Pickle was kept as comfortable as possible the past couple weeks. Also guiding me from her past experience on how to help children through this type of loss. Her suggestion was to tell them as soon as possible. Also, tell them it’s ok to be sad, but try and make life as normal as possible. Death of our pets is a normal part of life.

Later that day, I picked Max up from school and drove home nervous. It was Paczki day and when they were done shoving their faces with their special treats, I had the dreaded talk…

After I told them that pickled had passed away they looked stunned. Both welling up with tears I began hugging them. Then telling them that Pickle was now in Heaven with brother Patryk. Maxwell immediately said “I want him back”, then walked out of the kitchen and asked to be alone. My heart was so broken that I couldn’t ease his pain. Katia asked a lot of questions right away and we hugged non stop. When I went to check on Max he again said, “Stop” and that he wanted to be left alone. That same night they went to the old family home where Olive was. They said she was sniffing around looking for Pickle and sad. Max again said “I want pickle back”, but he was not as emotional as I anticipated.

Never have I seen my son like this before…

Both children seemed content and tired after kissing and hugging them good night. Almost immediately after tucking them in, while walking downstairs, was the calling of “Mommy” from a rattled voice. Maxwell was calling for me, I then asked him to come down stairs so that he did not keep his sister awake. The second he reached the bottom of the stairs my heart sunk, and I was looking at a completely shattered little boy. The tears pouring from his eyes. He collapsed in my arms saying he wants Pickle back. A true nightmare is not being able to take away your child’s pain. After we cuddled and I told him that his tears are all the love he feels for Pickle he was calmer. We laughed and talked a bit about how pickle is probably swimming in a pool of tennis balls and catching all the flies he could dream of.  Unfortunately, the next night was the same, breaking down the second he had a moment of silence. This time he bounced back a bit faster.

That dog had a talent for catching flies, and that was a talent I appreciated when the pesky things got inside our home. Determined to attack the intruder Pickle would sometimes knock his head (over and over) into the glass back door (it was a bit comical). He was an incredible dog to my children, so obedient while in my care. The best dog at playing fetch (seriously). He was my kids first puppy and will be forever missed. Now, finding solace in the fact that Pickle is no longer in pain, in Heaven with my son Patryk.

This site uses Akismet to reduce spam. Learn how your comment data is processed.

Welcome to Whisking Mama! I spend the best parts of my day creating delicious and yummy recipes. I share my recipes for the beautiful world to try, to send a bit of love your way! Food. Stories. Love ♡

Read more about me